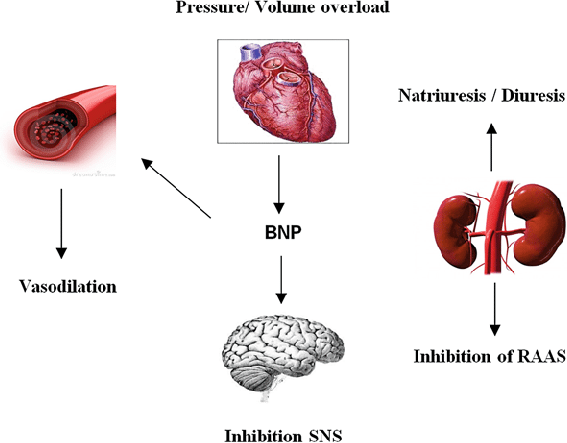 Brain Natriuretic Peptide (BNP) and N-terminal proBNP (NT-proBNP) are currently used in clinical medicine as diagnostic biomarkers for heart failure (HF) and cardiac dysfunction. In forensic medicine, they are also utilised as postmortem biomarkers to represent the deceased's heart function before to death. Several researches have looked at BNP and NT-proBNP in clinical medicine, but just a few have looked at its use in forensic medicine. The current study examines the biological characteristics, research and application status, and future research prospects of BNP and NT-proBNP in clinical and forensic medicine, consequently providing clinicians and forensic pathologists with useful information. Heart Failure (HF) and cardiac dysfunction affect more than 26 million people around the world, making them important worldwide public health issues. With the ageing of the population, the global burden of HF and cardiac dysfunction is rapidly and significantly growing [1,2]. The diagnosis of HF and cardiac dysfunction is critical in both clinical and forensic medicine because of the significant morbidity and mortality. For inpatients, clinically aided exams like as electrocardiography or echocardiography can be used to diagnose HF and cardiac dysfunction [3]. Due to the paucity of clinical medical records and the lack of assisted examinations for the deceased assessed by forensic pathologists, the diagnosis of HF or the measurement of heart function after death is extremely challenging. Postmortem evaluation and diagnosis, particularly in the case of HF or heart failure in the deceased without obvious morphological alterations, are highly difficult [4,5]. BNP and NT-proBNP (brain natriuretic peptide and N-terminal proBNP, respectively) are commonly employed as major markers for the clinical diagnosis of HF and cardiac dysfunction. Many forensic studies in recent years have shown that BNP and NT-proBNP can be used to reflect the cardiac function of the deceased before death using extensive animal experiments and postmortem specimens, and that they can also be used as postmortem biomarkers in forensic medicine to diagnose HF or cardiac dysfunction. However, just a few studies have looked at the use of BNP and NT-proBNP in forensic medicine. This article examines the biological characteristics, clinical and forensic research, and application status of BNP and NT-proBNP for this purpose. BNP and NT-proBNP are currently employed in clinical and forensic practise to assess heart function status. Many investigations in recent years have revealed that certain non-coding RNAs are substantially expressed in individuals with cardiac failure and play a role in BNP control. Exploring the expression patterns of BNP-related particular non-coding RNAs, such as microRNAs, in clinical and forensic samples, as well as how they influence BNP and non-coding RNA expression in forensic degradation or damaged materials, could be a future study topic in this subject. Exosomes, which are small vesicles seen in biological fluids such as serum and urine, have also been found to contain substances such as proteins, DNA, and RNA (coding RNA and non-coding RNA). Because of their special diagnostic significance and unknown underlying mechanisms, exosomes were projected to become a new hot topic in the field of markers for cardiovascular disorders. Exosome RNA and proteins have been linked to heart dysfunction and have been shown to mediate cardio protective effects. Exosomes containing AT1Rs have been identified from animals suffering from cardiac pressure overload in previous research. However, few researches have looked into the relationship between exosomes in body fluids and BNP. Exosomes as a biomarker for heart failure diagnosis in clinical and forensic medicine could thus be a future study topic. Pericardial fluid is an ideal biological sample for forensic pathology, as previously stated. Exosomes in human pericardial fluid have been proved to be diagnostic and therapeutic molecules for heart disease in clinical trials. Exosomes in pericardial fluid are still being explored in forensic medicine to see if they may be utilised to diagnose heart disease.